Commentary: Turkey’s Role for Syria
A political solution for Syria requires Washington to resolve differences with Ankara over Kurdish fighters. 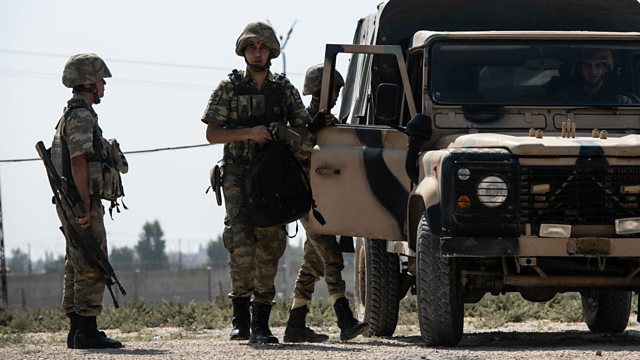 IN EARLY APRIL, U.S. President Donald Trump stated his desire to withdraw U.S. troops from Syria as soon as possible. Recently, U.S. officials have indicated that the Trump administration is exploring a plan to build an Arab force in northeastern Syria to replace these U.S. soldiers and support post-ISIS stabilization efforts.

However, Syria cannot be stabilized in a way that prevents the resurgence of ISIS – or the rise of a similar group – as long as the Assad regime remains in power.

The Assad regime's atrocities in Syria and the power vacuum caused by years of conflict allowed ISIS to grow and reap terror not only inside Syria's borders but also outside of them, from neighbors like Iraq and Turkey to Europe and even the U.S.

If the U.S. wishes to see a stable post-ISIS Syria, then it will also need to consider a post-Assad Syria, both what it looks like and how we get there.

In this effort, the U.S.'s closest and most effective ally will be Turkey. Ankara is already in close negotiation with Moscow and Tehran, to find a political solution to the crisis.

For the U.S., it is uncomfortable to see Turkey working so closely with Russia and Iran. During his April 12 confirmation hearing, Secretary of State nominee Mike Pompeo responded to a question on the trilateral dialogue between Turkey, Russia, and Iran, saying that "the American people need to be represented at that table" and that "[w]e can be part of that conversation."

However, while some in Washington choose to interpret Turkey's dialogue with Russia and Iran as a shift away from NATO, this is not the case. Turkey remains a committed member of NATO, and in fact, it is the member most affected by the crisis in Syria.

During his recent visit to Turkey, NATO Secretary-General Jens Stoltenberg underlined Turkey's "essential contributions" to the alliance, highlighting Turkey's efforts in the fight against ISIS as well as Turkish troop involvement in NATO operations and training activities in Afghanistan, Kosovo, and Iraq. He also emphasized that no NATO member has suffered more terrorist attacks than Turkey, saying that it is "the ally most exposed to the instability in this region."

In fact, it is this very instability that has driven Turkey to cooperate more closely with Russia and Iran rather than working exclusively with its NATO allies.

For Turkey, its cooperation with Russia and Iran is an alliance of convenience that spurs from Turkey's fears regarding the rise in northern Syria of the Democratic Union Party (PYD) and its armed wing, the People's Protection Units (YPG), both of which are affiliated with the Kurdistan Workers' Party (PKK), a U.S.-recognized terrorist organization engaged in direct violence with the Turkish state.

As PKK affiliates, the PYD and YPG directly threaten Turkey's security, a key example being that multiple terrorist attacks in Turkey in 2016 were conducted by attackers who had spent time training in northern Syria.

Just as the YPG threat has pushed Turkey to work with Russia and Iran to manage the fallout of the Syrian conflict on its own internal security, it has opened a considerable rift between Washington and Ankara due to the former's insistence on working with the YPG (as part of the Syrian Democratic Forces) to counter ISIS.

However, just as disagreements on the YPG loom over U.S.-Turkey relations in Syria, a different divergence of policy colors Turkey's relations with Russia and Iran.

Turkey remains strongly opposed to the continued presence of the Assad regime in Syria. Following the April 7 chemical attack in Douma, Turkish Foreign Minister Mevlut Cavusoglu said that "[t]he Assad regime should absolutely leave power in Syria," citing Assad's continued use of chemical as well as conventional weapons against his own people, which has resulted in nearly 1 million deaths.

Following the U.S.-U.K.-France joint strikes on Assad regime targets in the early morning of April 14, Ankara welcomed the response. Turkish President Recep Tayyip Erdogan said that the strikes sent the Assad regime a "message that its massacres wouldn't be left unanswered."

Turkey's Operation Olive Branch against YPG elements in the district of Afrin in northwestern Syria is another key example of both the extent and limitations of Turkey's relationship with Russia. While the removal of Russian military units from Afrin served as a "green light" for Turkish troops to carry out their operation, now that the Turkish military and the Free Syrian Army (FSA) units it supports have captured the city center, disagreements between Ankara and Moscow are surfacing.

Both Russia and Iran have called on Turkey to hand over the district to the Assad regime, but Turkey has refused. Defense Minister Nurettin Canikli recently said that Turkey will continue operations in the district until all terror risks are eliminated – and he went on to indicate that Ankara will only turn over control of Afrin to the central government in Syria once new leadership has been brought in through elections.

These disagreements underline that for all the ongoing negotiations with Moscow and Tehran, Turkey is far from abandoning NATO for Russia and Iran. As the fight against ISIS winds down, the most pressing concern will be the question that has plagued the international community from the very start of the Syrian conflict: How will we stop the bloodshed?

If the answer is a political solution rather than a sustained military intervention – which the Trump administration seems intent on avoiding – then the U.S. should prioritize resolving differences with Turkey over the YPG so that Washington can work closely with Ankara to ensure that a post-ISIS Syria aligns with U.S. interests in the region.