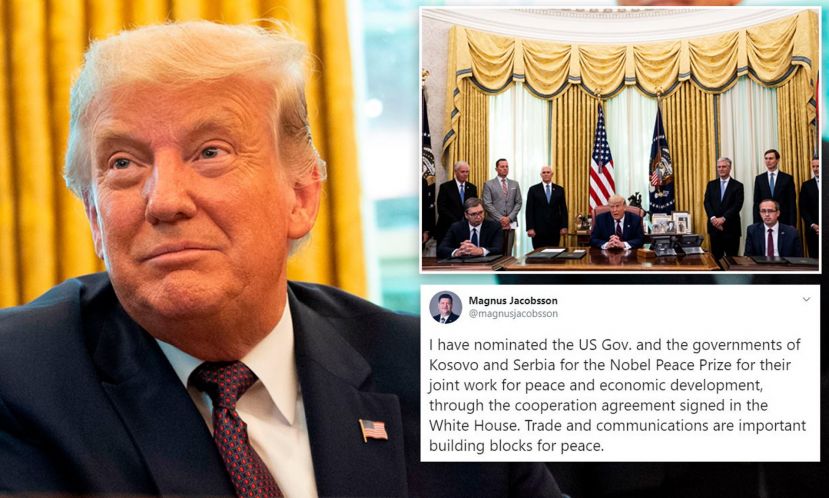 A Norwegian far-right politician announced that he nominated the U.S. President Donald Trump for the Nobel Peace Prize for his Middle East efforts. Christian Tybring-Gjedde, a parliament member of the far-right Progress Party in the Norwegian Parliament, said President Trump should be selected for the Nobel Peace Prize for his work on the agreement reached between the United Arab Emirates and Israel. Israel and the United Arab Emirates had reached a historic agreement last month for the bilateral normalization of relations. The deal is expected to be signed on September 15 at the White House.

In the meantime, Magnus Jacobsson from the Swedish Parliament was the second person to nominate President Trump for the Nobel Peace Prize. Jacobsson said that the reason behind this nomination for the prize is Trump's conciliation and peacemaking efforts between Kosovo and Serbia.

Former President Barack Obama was awarded the Nobel Peace Prize in 2009 at the very beginning of the first term of his early presidency.

Saying last year, "I would get a Nobel Prize for many reasons if they gave it out fairly," President Trump stated that the Nobel Prize is not awarded fairly.

In the written statement made by White House Spokesperson Kayleigh McEnany, reporting that President Trump is nominated for Nobel Peace Prize at a time, where the international community's support for peace treaties and trust for the Middle East are tested, she stated, "By uniting two of America's closest partners in the region, this agreement will create a more peaceful, secure, and prosperous the Middle East."

WHO DECIDE THE NOBEL PRIZE WINNERS AND HOW ARE THEY DECIDED?

The Norwegian Nobel Committee selects Nobel Peace Laureates, and the Norwegian Parliament appoints this committee, which comprises five members. Members of the committee, who are expected to represent the power of political parties equally, can remain in office for six years and be re-elected. Furthermore, all members must be citizens of Norway.

WHO GETS NOMINATED FOR THE NOBEL PEACE PRIZE?

An individual or an institution cannot nominate themselves for the Nobel Peace Prize. Those who can be selected are listed as follows: